NFPA 70E electrical standards see a major shift in the 2015 edition. Hear Bill Burke of the NFPA explain the change in risk assessment.

Bill urges non-electricians to be aware of NFPA 70E. It will help them understand the potential for huge liabilities with loss of life, critical injuries, and equipment damage from electrical hazards. Company owners, managers and safety managers should all have access to a copy of The Handbook, which includes the code with commentary.

Dan Clark interviews Bill about the changes since the 2012 edition, including the Prohibited Approach Boundary, PPE tables, and how HRC (0) has been dropped.

The National Fire Protection Association — The NFPA — publishes NFPA 70E, The Standard For Electrical Safety In The Workplace, every three years. 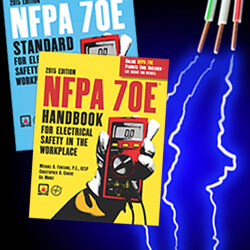 (:14)
Bill Burke: It’s really a philosophical shift. We have gone much more toward risk assessment.

(:19)
Dan Clark: The NFPA 70E electrical standards are in place for 2015. Electricians need to know this, but so do building owners and safety managers.

Hello, I’m Dan Clark. Today we’re talking with Bill Burke, Division Manager of Electrical Engineering at the National Fire Protection Association, the NFPA. Bill has been in the electrical industry for more than 30 years doing electrical consulting, and staying safe and not getting shocked! He holds a bachelor’s degree in electrical engineering from Northeastern University and a master’s degree in business administration from Boston University. Hello Bill!

Dan: I’m well, thank you. Thanks for being part of this podcast.

Dan: Every three years, the NFPA publishes the NFPA 70E, The Standard For Electrical Safety In The Workplace, and the 2015 edition is out. For a safety manager who is not an electrician, Bill, should they get a copy of it?

Bill: Ah, absolutely. I think one of the things that is becoming more and more evident is that safety managers and facility owners have responsibilities that are dictated through 70E.

(1:29)
Dan: Give us a few of the significant changes, since the 2012 edition, that a safety manager or facility owner should be aware of.

Bill: Sure. This year’s edition of 70E, the majority of the changes, certainly they change words here and there, but it’s really a philosophical shift. And that philosophical shift is that we have gone much more toward risk assessment.

Dan: Okay. And still focuses on the nitty-gritty of the code?

(1:59)
Bill: That’s correct. Certainly, 70E guards against shock and arc flash. One of the things that we look for in those has to do with risk assessment now.

Dan: Hmm, okay. Well, give us an example.

Bill: A major component of that risk assessment has to do with maintenance. For the first time ever, we’ve really, kind of, rolled that in so that, as a facility manager, they know what equipment’s been maintained and what the status of that equipment is. That, in general, has an effect on the risk, or potential risk, of that hazard.

Bill: Well, the assessment is really done by their own maintenance staff. The electrical people that are going to be doing the work should be conducting the assessment of what work needs to be done, and what potential risks they’ll run into. But the building owner or building representative has a component to it because they know what equipment, when it was installed, when it was maintained and how it was maintained. So it’s really all the affected parties.

Dan: But it took a while to get the printed edition.

Dan: And that is now available at the time of this podcast, October 2014.

Dan: So, how can people order it?

Bill: That’s a good question for those folks, especially in facilities that are not necessarily electrical experts, I would really recommend the Handbook. The code, just like the National Electric Code, is physically a code. It’s speaking in code language and those are rules for implementation. The Handbook includes the entire code, verbatim, but it also includes commentary. In a nutshell it says “What you just read really means this.”

Bill: And what it does is that it has a tendency to take it out of code speak, to put in perspective with someone who’s not necessarily an electrical expert, can take it and can get a much better understanding of what’s going on.

Dan: Well, that’s a great idea. I imagine that even some electricians use it.

Bill: Personally, myself, even use the Handbook. There are illustrations, and diagrams and pictures. It also has commentary by our industry experts about exactly what this change was and why was implemented. Especially in a situation where 70E, it is technically, 70E can get very complex very quickly.

Bill: To someone who’s not an electrical expert, I think that it’s really the way to go, because it’s in plain language, explains what the change is and why that change happened.

Dan: Well, one question, though. If a building owner or a safety manager gets the Handbook with some of these common man notations.

Dan: Is there a chance that they might think that they’re qualified to do electrical work?

Bill: Ah, “NFPA 70E for the common man” is somewhat of an oxymoron because the assumption is that you have a very good handle on the electrical workings before you’re actually going into a situation where you would require NFPA 70E.

(5:19)
70E is a document that protects electrical workers from the hazards of doing their job.

Dan: Great. Now, I understand that the Standard is not a law. It’s a consensus, even though OSHA asked for it. Ah, what does that mean, that it’s just a consensus?

(5:55)
Contrary to popular belief, NFPA staff, such as myself, cannot participate in the code making process. What we do is we vigilantly guard our rules and regulations about how our code is developed, but it is developed entirely by volunteers and the public. There are about three hundred and twenty people on the face of the earth that cannot change an NFPA code and standard, and those are the employees of NFPA.

Dan: Wait. Let me get this straight. I don’t have any electrical background, but I could contribute to the next NFPA 70E.

Dan: Where you, an electrical engineer can’t have any say.

Bill: That’s correct. The public has an input. They can request a modification and they are due a response as to whether that was taken into consideration, or not. And that’s where we come up with the consensus standard.

Dan: So, if NFPA 70E is not a law, can you be cited for not complying?

Bill: Absolutely. You would be cited by an OSHA inspector. Usually, the way it works is, hopefully, no one has any accidents. But in the case of an accident, you may have an OSHA representative come out, and one of the first things they would ask you is for your electric safety plan. They could be cited, very much, if there safety plan was not followed, or if it’s not in accordance with the parameters set up by NFPA 70E.

Bill: Well, that, uh, although I have a long history of being an electrical safety expert, myself, because I’m an NFPA employee I can’t really hope for anything. All I can hope for is that everybody has great ideas and that they follow the right criterion and the rules that have been set forth by NFPA on how the code is developed.

One of the things we’ve found, especially in electrical safety, is education and that has come tremendous strides in the past even ten years as far as people knowing what they’re in for, and how to protect themselves.

(7:54)
Dan: Well, that’s good to hear, Bill, because there are so many injuries and fatalities in the workplace, ah, it’s got to improve.

Dan: Well, we’re almost out of time here. Any final thoughts that you can offer to the building owner or safety manager that’s listening.

Bill: Well, I think that, very much, the way to handle electrical projects is planning. One of the things that we stress is what they call safety briefings in that, even on a long-term project, every day: “What we going to do today?What are the issues that we’re going to be facing, and what are the ways to mitigate those issues?”

(8:27)
And it sounds a little corny and, unfortunately sometimes, they get rote and mundane…

Bill: But a strong safety—uh, outside on a job they call them tail board discussions—are really, really critical to people’s safety. As most safety managers would know, when you’re doing something new and different, that’s when you’re paying attention. More people get hurt in electrical safety settings when they’re doing routine work. Stuff that they’ve done forever and, all of a sudden, just that one day, they’re not paying as much attention as they should. Anybody that understands electricity says you only get one shot.

Dan: Even though they’ve been flying for years. Is that something that electricians do?

Bill: No question. NFPA has another publication, which has to do with enhancing that electrical safety program, [The Electrical Safety Program Guide] and one of the things that we very much advocate is just that. “Okay, I’m going to be changing a breaker today.” And so that there is a checklist for changing a breaker. “What are the things that I have to do? How do I do lockout-tagout? How do I make this place electrically isolated and as safe as possible for anybody that’s going to be involved in that project?”

(9:37)
Dan: Yeah. Well, this is great, Bill, and we didn’t get too far out into the weeds, where everybody’s eyes rolling back…

Bill: Right, and I can talk about arc flash all day, but to a nonelectrical audience…

Bill: I think it’s far more important that they understand that maintenance is a key component now. One of the things that building owners don’t realize is that they have certain responsibilities when it comes to doing electrical work.

Dan: One more time, let everybody know where they can buy the NFPA 70E 2015 edition.

Dan: And for those that aren’t electricians, but still need to know something about it, you recommend the handbook…

Dan: With the code and the extra explanations.

Dan: (laughs) Well, we salute you, because I know that, ah, this is a nonprofit organization, the NFPA.

Dan: I know you can’t give away these manuals because it costs money to produce them.

(10:40)
Dan: But it’s certainly worth the investment for the minimal amount of costs it takes to get these manuals in their hands, so, I really appreciate your time today, Bill.

Bill: Okay, very good. Thank you, very much, for the opportunity.

Dan: Glad to do it. Our guest has been Bill Burke, Division Manager of Electrical Engineering at the NFPA, and thank you for joining us, Bill. I’m Dan Clark.